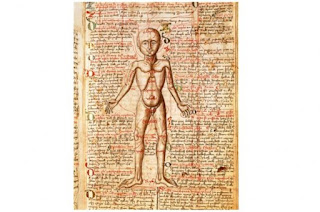 Medicines in the medieval period were sometimes homemade, if they weren’t too complicated. Simple medicines consisted of a single ingredient – usually a herb – but if they required numerous ingredients or preparation in advance, they could be purchased from an apothecary, rather like a modern pharmacist.
Although some medical remedies were quite sensible, others were extraordinarily weird. They all now come with a health warning, so it’s probably best not to try these at home...

Supposedly invented by St Paul, this potion was to be drunk. The extensive list of ingredients included liquorice, sage, willow, roses, fennel, cinnamon, ginger, cloves, cormorant blood, mandrake, dragon’s blood and three kinds of pepper.
Although this sounds like a real witch’s brew, most of the ingredients do have some medicinal value: liquorice is good for the chest – it was and continues to be used to treat coughs and bronchitis; sage is thought to improve blood flow to the brain and help one’s memory, and willow contains salicylic acid, a component of aspirin. Fennel, cinnamon and ginger are all carminatives (which relieve gas in the intestines), and would relieve a colicky stomach.
Cormorant blood – or that of any other warm-blooded creature – would add iron for anaemia; mandrake, although poisonous, is a good sleeping draught if used in small doses, and, finally, dragon’s blood. This isn’t blood at all, and certainly not from a mythical beast! It is the bright red resin of the tree Dracaena draco – a species native to Morocco, Cape Verde and the Canary Islands. Modern research has shown that it has antiseptic, antibiotic, anti-viral and wound-healing properties, and it is still used in some parts of the world to treat dysentery – but I’m not sure it could have done anything for epileptics or cataleptics.

2) A good medicine for sciatica [pain caused by irritation or compression of the sciatic nerve, which runs from the back of your pelvis, all the way down both legs]

A number of medieval remedies suggested variations of the following: “Take a spoonful of the gall of a red ox and two spoonfuls of water-pepper and four of the patient’s urine, and as much cumin as half a French nut and as much suet as a small nut and break and bruise your cumin.
Then boil these together till they be like gruel then let him lay his haunch bone [hip] against the fire as hot as he may bear it and anoint him with the same ointment for a quarter of an hour or half a quarter, and then clap on a hot cloth folded five or six times and at night lay a hot sheet folded many times to the spot and let him lie still two or three days and he shall not feel pain but be well.”
Perhaps it was the bed rest and heat treatments that did the trick, because I can’t see the ingredients of the ointment doing much good otherwise!

3) For burns and scalds

“Take a live snail and rub its slime against the burn and it will heal”
A nice, simple DIY remedy – and yes, it would help reduce blistering and ease the pain! Recent research has shown that snail slime contains antioxidants, antiseptic, anaesthetic, anti-irritant, anti-inflammatory, antibiotic and antiviral properties, as well as collagen and elastin, vital for skin repair.
Modern science now utilises snail slime, under the heading ‘Snail Gel’, as skin preparations and for treating minor injuries, such as cuts, burns and scalds. It seems that medieval medicine got this one right.

“Take equal amounts of onion/leek [there is still debate about whether ‘cropleek’, as stated in the original recipe, in Bald’s Leechbook, is equivalent to an onion or leek today] and garlic, and pound them well together. Take equal amounts of wine and bull’s gall and mix them with the onion and garlic. Put the mixture in a brass bowl and let it stand for nine nights, then strain it through a cloth. Then, about night-time, apply it to the eye with a feather.”
Would this Anglo-Saxon recipe have done any good? The onion, garlic and bull’s gall all have antibiotic properties that would have helped a stye – an infection at the root of an eyelash.
The wine contains acetic acid which, over the nine days, would react with the copper in the brass bowl to form copper salts, which are bactericidal. Recently, students at Nottingham University made up and tested this remedy: at first, the mixture made the lab smell like a cook shop, with garlic, onions and wine, but over the nine days the mixture developed into a stinking, gloopy goo. Despite its unpromising odour and appearance, the students tested it for any antibiotic properties and discovered that it is excellent. The recipe is now being further investigated as a treatment against the antibiotic-resistant MRSA bug, and it looks hopeful.
The ancient apothecary was right about this remedy, but it was one that needed to be prepared in advance for sale over the counter.

“Take an owl and pluck it clean and open it, clean and salt it. Put it in a new pot and cover it with a stone and put it in an oven and let it stand till it be burnt. And then stamp [pound] it with boar’s grease and anoint the gout therewith.”
Poor owl! I can’t think that this would have helped the patient very much either…

“Take half a dish of barley, one handful each of betony, vervain and other herbs that are good for the head; and when they be well boiled together, take them up and wrap them in a cloth and lay them to the sick head and it shall be whole. I proved.”
Betony [a grassland herb] was used by the medieval and Tudor apothecary as an ingredient in remedies to be taken internally for all kinds of ailments, as well as in poultices for external use, as in this case. Modern medicine still makes use of the alkaloid drugs found in betony for treating severe headaches and migraine.
Vervain’s glycoside [a class of molecules in which, a sugar molecule is bonded to a ‘non-sugar’ molecule] derivatives too are used in modern treatments for migraine, depression and anxiety, so once again the apothecary knew what he was doing with this recipe!

7) For him that has quinsy [a severe throat infection]

“Take a fat cat and flay it well, clean and draw out the guts. Take the grease of a hedgehog and the fat of a bear and resins and fenugreek and sage and gum of honeysuckle and virgin wax. All this crumble small and stuff the cat within as you would a goose. Roast it all and gather the grease and anoint him [the patient] with it.”
With treatments like this, is it any wonder that a friend wrote to Pope Clement VI when he was sick, c1350, to say: “I know that your bedside is besieged by doctors and naturally this fills me with fear… they learn their art at our cost and even our death brings them experience.”

“Take the juice of horehound to be mixed with diapenidion and eaten”
Horehound [a herb plant and member of the mint family] is good for treating coughs, and diapenidion is a confection made of barley water, sugar and whites of eggs, drawn out into threads – so perhaps a cross between candy floss and sugar strands. It would have tasted nice, and sugar is good for the chest – still available in an over-the-counter cough mixture as linctus simplex.

“To void wind that is the cause of colic, take cumin and anise, of each equally much, and lay it in white wine to steep, and cover it over with wine and let it stand still so three days and three nights. And then let it be taken out and laid upon an ash board for to dry nine days and be turned about. And at the nine days’ end, take and put it in an earthen pot and dry over the fire and then make powder thereof. And then eat it in pottage or drink it and it shall void the wind that is the cause of colic”
Both anise and cumin are carminatives, so this medicine would do exactly what it said on the tin – or earthen pot. The herbs dill and fennel could be used instead to the same effect – 20th-century gripe water for colicky babies contained dill.
This remedy would have taken almost two weeks to make, so patients would have bought it from the apothecary, as needed.

Toni Mount is an author, historian and history teacher. She began her career working in the laboratories of the then-Wellcome pharmaceutical company [now GlaxoSmithKline], and gained her MA studying a 15th-century medical text at the Wellcome Library. She is also a member of the Research Committee of the Richard III Society.

Her books, all published by Amberley, include Everyday Life in Medieval London: From the Anglo-Saxons to the Tudors; The Medieval Housewife & Other Women of the Middle Ages and her latest book, Dragon’s Blood & Willow Bark: The Mysteries of Medieval Medicine, which is out now.
Posted by Mary Ann Bernal at 5:00 AM