Q&A: Where did the monks go after the dissolution of the monasteries? 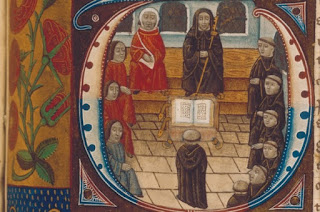 A 15th-century illumination shows monks praying. Some were starved to death when they refused to take Henry VIII’s Oath of Supremacy. (AKG)


Initially, the authorities sought to close smaller communities, meaning those who wished could move to a larger religious house. Once these, too, were marked for closure, those in religious orders had few options.
Most commonly they accepted the offer of a pension. This award was generally left to the discretion of the commissioners carrying out the closure rather than being a centrally set sum. The wealth of the monastery would be considered, with those in higher ‘management’ positions, such as an abbot, being offered an increased sum – partly, it has been argued, to entice them to go peacefully. Older members could also receive an increased amount as their chances of future employment were less than the younger members, who could potentially augment their pensions.
Some members of religious orders chose exile; others offered resistance to the changes. When the Carthusian monks refused to take the Oath of Supremacy, recognising Henry as head of the church, several were hanged, drawn and quartered, while others ‘disappeared’ in prison and were starved to death.
It is often forgotten that the suppression of the monasteries included the closure of female religious houses. Frequently, nuns received smaller pensions than the monks despite their reduced chances of finding future employment.
Elizabeth Throckmorton was the abbess of the Poor Clares at Denny in Cambridgeshire. After the closure of the convent, she, like other nuns, returned to her family. At her nephew’s house at Coughton Court in Warwickshire, she and several others lived in an upper room, wore their habits and continued their conventual life.
It is, of course, an irony of the Reformation that Martin Luther, as an Augustinian, had been a member of a religious community.
Answered by James Kelly, fellow at Durham University’s Centre for Catholic Studies.
Posted by Mary Ann Bernal at 5:00 AM