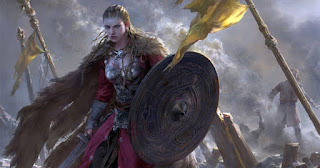 Then the high-born lady saw them play the wounding game, she resolved on a hard course and flung off her cloak; she took a naked sword and fought for her kinsmen's lives, she was handy at fighting, wherever she aimed her blows.” - ‘The Greenlandic Poem of Atli’ (st. 49) (Larrington, 1996)

Arguably the most iconic example of a warrior burial in Viking Age Sweden is a mid-10th century grave in Birka. This grave has been the example of what a Viking warrior burial should look like for over a century. Everyone assumed that a man was the one laid to rest in the grave – but new research shows assumptions should not be taken as fact. It is the remains of a warrior woman in that grave. 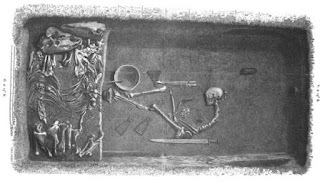 Illustration by Evald Hansen based on the original plan of the Viking Age warrior grave (Bj 581) by excavator Hjalmar Stolpe; published in 1889. (Stolpe, 1889)

According to The Local, the first person to do something about the fact that the skeleton’s morphological features don’t coincide with a male body was Anna Kjellström, an osteologist at Stockholm University. Kjellström was examining the skeleton for an unrelated research project when she noticed that the cheekbones were finer and thinner than men would normally have. However, the tell-tale sign that the skeleton is female is the obvious nature of the hip bones.

After a thorough osteological analysis, DNA testing was applied. And, as Phys.org reports “DNA retrieved from the skeleton demonstrates that the individual carried two X chromosomes and no Y chromosome.” Based on the results of the study, Charlotte Hedenstierna-Jonson of Stockholm University, who led the research, asserted, “It’s actually a woman, somewhere over the age of 30 and fairly tall too, measuring around 170 centimetres [5.5ft.]”

Furthermore, the researchers write in their journal article that. “The Viking warrior female showed genetic affinity to present-day inhabitants of the British Islands (England and Scotland), the North Atlantic Islands (Iceland and the Orkneys), Scandinavia (Denmark and Norway) and to lesser extent Eastern Baltic Europe (Lithuania and Latvia).” 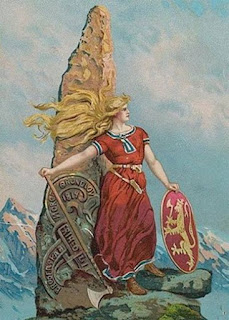 The researchers decided to confirm the nature of the woman’s travels by using a strontium isotope analysis on three molar teeth from the lower jaw. The results of this testing show that the woman was a nonlocal who had moved to Birka.


Professor Mattias Jakobsson at Uppsala University's Department of Organismal Biology highlighted the importance of this find when he said, “This is the first formal and genetic confirmation of a female Viking warrior.” 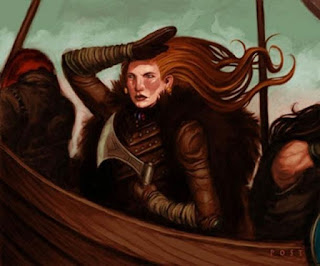 Artistic representation of a Viking Age warrior woman on a ship. (Women in History)

The belief that the woman found in Birka, Sweden was a warrior is largely based on the grave goods that were found alongside her body. Her weapons included a sword and armor-piercing arrows, an axe, a spear, a battle knife. There were also shields, two horses, and a war-planning gaming board with a full set of gaming pieces in the grave, which suggest the woman was a high-ranking Viking warrior. As Charlotte Hedenstierna-Jonson explained:

“The gaming set indicates that she was an officer, someone who worked with tactics and strategy and could lead troops in battle. What we have studied was not a Valkyrie from the sagas but a real life military leader, that happens to have been a woman.” 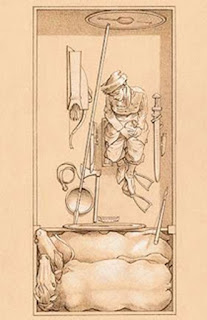 Reconstruction of what the grave may have looked like. (Uppsala University)

Although the gender stereotype for Viking Age warriors has almost exclusively described them as men, the idea of female warriors is not unknown in Norse society. For instance, Norse mythology discusses a group of figures known as Valkyries. Ancient Origins writer ‘Dwhty’ explained that the Valkyries were: “believed to be the handmaidens of Odin, the supreme god of the Norse pantheon. They were sent by this god to the battlefield to select warriors worthy of entering Valhalla after their deaths. The Valkyrie were portrayed as warriors, being equipped with helmets, mail-coats, and spears.” 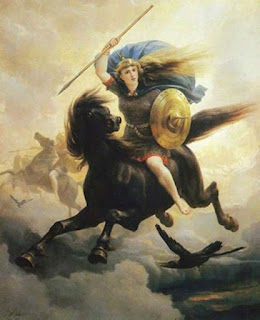 Another example of female warriors in Norse society can be seen in the Battle of Bråvalla, a legendary battle from the 8th century AD. 300 female warriors known as shieldmaidens are said to have fought on the side of King Harald Wartooth in that battle.

This supports the conclusion by Neil Price, Professor at Uppsala University's Department of Archaeology and Ancient History, who said there is some written evidence supporting the idea of female warriors in the Viking Age, but it doesn’t detract from the importance of the discovery because “this is the first time that we've really found convincing archaeological evidence for their existence.” 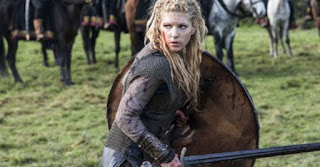 Lagertha - a respected warrior and reigning queen of Denmark in the TV series ‘Vikings’. (CC BY SA)

Top Image: ‘Brynhildr.’ Used here as a representational image of a woman warrior in the Viking Age. Source: FLOWERZZXU/Deviant Art

By Alicia McDermott
Posted by Mary Ann Bernal at 2:00 AM