The Gladiators of Rome: Blood Sport in the Ancient Empire 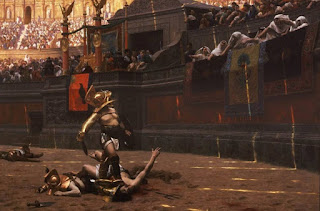 The ancient Romans were well known for many things – their engineering marvels, their road networks, and the establishment of Roman law throughout the empire. They were, however, also renowned for their war-like nature. After all, this allowed the Romans to build an empire in the first place. This appetite for violence not only manifested itself in Rome’s imperialist policy, but also in its most well-known sport – the gladiatorial combats. 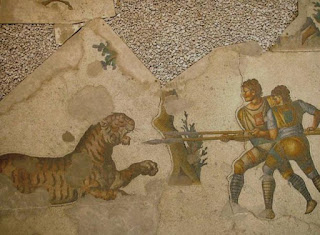 Two Venatores (those who made a career out of fighting in arena animal hunts) fighting a tiger. Floor mosaic in Great Palace of Constantinople (Istanbul), 5th century. (Public Domain) 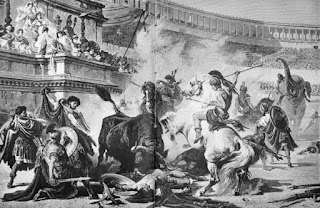 The gladiators were often prisoners of war, slaves, or criminals with a death sentence . The use of Rome’s defeated enemies in these games is reflected in some of the gladiator types, including the Thraex (or Thracian), the Hoplomachus and the Samnite. Thus, gladiatorial combats may be seen as a way for the Romans to re-enact the wars that they had with their conquered subjects. Yet, not all gladiators were forced into the trade.

Despite the hard and precarious life, gladiators were the superstars of their day. The benefits to be found in fighting in the arena – fame, glory and fortune, were strong enough to entice some people to become gladiators voluntarily. (However, the evidence of such citizen gladiators is extremely slim .) It is also recorded that some Roman emperors even participated in gladiatorial games themselves, the most famous of whom was probably the emperor Commodus. The participation of emperors in these games, however, was scorned by some, as gladiators belonged to the lowest of social classes.

Studies analyzing the teeth of supposed gladiators which have been found in Driffield Terrace, York, UK have also suggested that gladiators generally came from harsh backgrounds. The research shows most of the men were extremely malnourished as children and likely came from disadvantaged homes. Their remains show the poor men were well fed and adapted to battle later in life – possibly so they would be stronger and more impressive looking combatants in the gladiatorial games.

Despite the low social status of gladiators, they had the potential to gain the patronage of the upper classes, even that of the emperor himself. According to Suetonius, the emperor Nero awarded a gladiator, Spiculus, with houses and estates worthy of generals returning triumphantly from a war. Regardless of the authenticity of his claim, Suetonius intended to highlight the extravagant nature of the emperor by demonstrating that Nero was willing to shower a presumably lower classed individual with such expensive gifts. 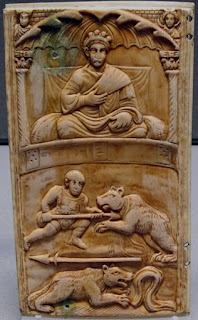 Whilst the story of Spiculus may be an extreme case, assuming that it was true, gladiators were indeed valuable assets to their “owners”. The more victories a gladiator won the more valuable he was. The popularity of victorious gladiators is evident in the surviving graffiti on walls in Rome and other cities where such games were held. Some of the graffiti reveal the number of victories a gladiator had: Petronius Octavius 35, Severus 55, Nascia 60, whilst others suggest that gladiators were quite popular with the women: ‘Crescens, the net fighter, holds the hearts of all the girls’, and ‘Caladus, the Thraecian, makes all the girls sigh’. 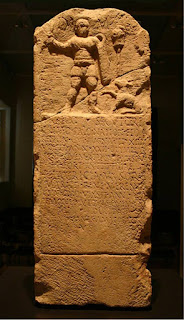 Stele for the gladiator Urbicus, from Florence, killed after 13 fights aged 22, in the mid-3rd century. In the inscription the man is mourned by his wife of 7 years, Lauricia, and by his two daughters, Olympia and Fortunensis. The inscriptions warns obscurely "the one who kills the winner", adding that Urbicus' fans (amatores) would keep his memory alive. ( No Copyright Restrictions )

By the 4th century AD, the popularity of gladiatorial games was in a decline, as the Roman Empire adopted Christianity as its official religion. It was, however, only in 404 AD that gladiatorial games were altogether banned by the emperor Honorius due to the martyrdom of St. Telemachus. According to the historian Theodoret, Telemachus was a monk who came to Rome from Asia Minor. During one of the gladiatorial games in the city, Telemachus leapt into the arena to stop two gladiators from fighting. The spectators, who were obviously unhappy with Telemachus’ action, proceeded to stone the monk to death. However, one form of gladiatorial games, the venationes (wild animal hunts), continued for another century. 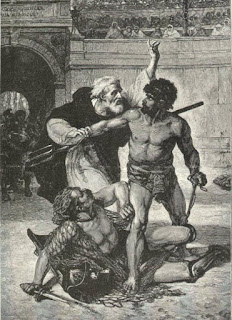 Telemachus stops two gladiators from fighting. ( Candle in a Cave )

By Ḏḥwty
Posted by Mary Ann Bernal at 1:00 AM