What was England’s reaction to the introduction of the Gregorian calendar in 1751? 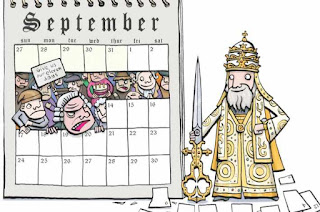 There’s a long-standing belief that when Britain caught up with 16th-century science by adopting the Gregorian calendar in the 18th century, our ancestors rioted over the loss of 11 days of their lives. Well, not quite.

When Pope Gregory XIII had decreed the change in 1582 most western European states, Catholic and Protestant, quickly fell into line with what was simply an accurate astronomical adjustment. Protestant England resisted this papist necromancy for 170 years.

When, at last, legislation was introduced to change the calendar, it wasn’t contentious. The new calendar changed the beginning of the year in England to 1 January (rather than 25 March, as previously; Scotland had already changed). In England, Ireland, Scotland and Wales that year, as well as the colonies, the day following 2 September 1752 would be 14 September 1752.

There’s almost no evidence of riots over the loss of the 11 days, although there was clearly widespread annoyance when the change became a pretext for early demands for payment and for delaying the settlement of bills, wages or debts.

Much of the legend seems to be based on William Hogarth’s 1755 picture An Election Entertainment which shows a placard with the words “Give us our eleven days”. Several reliable authorities claim that many country folk insisted on celebrating Christmas Day on what was now 5 January, and continued to do so for a long time afterwards.

Answered by: Eugene Byrne, author and journalist
Posted by Mary Ann Bernal at 1:30 AM