What was the sweating sickness in Tudor England? 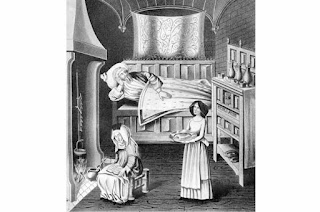 A rather mysterious illness, the sweating sickness hit in a series of epidemics, but was not always fatal.

Symptoms included cold shivers, headaches, pain in the arms, legs, shoulders and neck, and fatigue or exhaustion. Far from being a disease that raged through the lower classes, many well known individuals of the Tudor court contracted the illness, including Anne Boleyn and her brother and father, George and Thomas, along with Cardinal Wolsey.

The sweating sickness killed numerous nobles and courtiers, including two of the Duke of Suffolk’s sons, Henry and Charles, and Mary Boleyn’s first husband, William Carey.