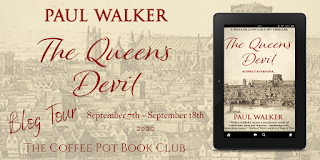 William Constable, recently married astrologer and mathematician, has settled into routine work as a physician when he is requested to attend two prisoners in the Tower of London. Both are accused of separate acts treason, but their backgrounds suggest there may be a connection.

Sir Francis Walsingham and Lord Burghley urge William to discover further intelligence from the prisoners while tending their injuries from torture.

The agent's investigations lead him to the French Embassy, which lies at the heart of a conspiracy which threatens the nation.

Through his enquiries, an unsuspecting William becomes entangled in a perilous web of politicking and religious fervour.

The threat comes from one the most powerful men in the English court – one referred to as the Queen’s Devil.

William faces a race against time to unpick these ties, climaxing in a daring raid on the Embassy. 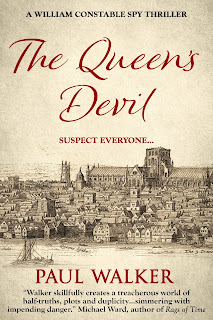 William Constable is at the Tower of London to tend the injuries from torture of the alleged conspirator, John Somerville
…
A manservant opens the door, and a short, round woman exits. She is wrapped in a heavy grey cloak, and her shoulders shiver at the sudden loss of warmth. I hazard she is no more than twenty-five, and the cover is a fine wool, so this may be the lady mentioned by Burghley.

She says, ‘Doctor Constable, I am Mary Brydges. I will take you to Master Somerville.’ She meets my gaze with an air of self-assurance and hands my note back.

‘Good day to you, Lady Brydges. I am grateful for your consideration in leaving the comfort of your chamber to guide me.’

She smiles and dismisses my escort with a wave of her hand. ‘We have moved him to a chamber in this tower.’ She points ahead. ‘We saw no reason to subject you to the dismal conditions of his examination cell. I have placed bowls of clean water and linen wraps on a table there for your use.’

I dip my head to show appreciation of her kindness. We climb wooden steps to the tower door, which is locked and barred. She gestures with a gloved hand, and I answer by pounding the door with my fist. It is opened by a thickset man with a bushy beard, who wipes his hands down a leather jerkin before bowing deeply and making way for our entrance. This will be the guard room. Two men are sat at a table spread with the pickings from carcasses of boiled fowl. It seems our entry is unexpected. After a moment of uncertainty, they stand and bow stiffly. The first guard takes a ring of keys and leads us up a stone stairway to the next storey. He unlocks a door and leaves us. I want to reach for the handle, but she places her hand on my arm and watches as the guard descends. When he is gone, she says, ‘Do you wish me to enter with you and introduce Master Somerville? I should warn that his body has suffered cruel handling, and his mind is insecure. He has been informed that I have summoned a physician to tend his wounds, but my telling may be already forgotten.’

‘Thank you, Lady Mary, an introduction and repeated explanation may be helpful in his acceptance of my presence.’ She has a pleasant aspect and has been thoughtful in her preparation. It is a wonder that a young woman of her disposition should be charged with the care of a tortured man in a place of grisly reputation.

I follow her into the chamber. It is a fair size, but with poor light. Only one window is unshuttered, and the flame of a single candle on a table sputters and protests at a waft from the open door. The walls are bare stone. A small fire takes some of the nip from the air. As my eyes become accustomed to the gloom, a bed appears in the far corner, and I surmise that the dark hunched figure under the covers is Somerville. Mary explains that only one of the three windows is glazed, and she assumed we would favour comfort over light. She takes the candle, lights another, and carries it to the bed.

‘Master Somerville, I have brought Doctor Constable to ease your discomfort.’ She speaks in a low soothing voice, as a mother to her babe.

The bundle of covers stirs as Lady Mary touches my arm, hands me the candle, and signals she will leave us. I pull up a stool, sit by the bed, and remove my bag of medicines from a shoulder. There is grunting and huffing as he struggles to rise, then a sigh as his body collapses. I hold the candle close, see his head, and… lurch back at the grotesque disfigurement of a face. Beneath a straggle of long fair hair emerges a swollen misshape with a deep cut to the forehead and scabbed holes in each cheek; one with a flap of raw pink flesh exposed.

I say, ‘I am Doctor William Constable. Lady Mary has asked me to tend your wounds. To begin, I will bathe your face.’

I make to rise and go to the table, but he moans and levers himself up on an elbow. He mutters a word I do not understand. He tries again. It is as though he speaks through a mouthful of pebbles. I move my ear to his mouth. I think I understand; he says ‘feet’. Does he wish me to examine them? I put the candle on the floor, hook my hands under his shoulders, and help him to sit. A big man, but weak with loose flesh around his bones, signifying he has been starved of food. He squeaks and groans pitifully until he is upright. He draws a breath and utters more words. Is one… ‘angel’?

Mystified at first, then I say, ‘Do I understand you refer to the Lady Mary as an angel?’

He nods his head slowly in confirmation. In his situation, it may be that any who show sympathy are regarded as extraordinary in their kindness. I lower the candle to his feet, which dangle over the edge of the bed. They are an ugly sight; bent, broken, and bruised. It appears his tormentors have taken a hammer or other weight to them. I hesitate to touch as I am sure the pain will be terrible. Instead, I delve into my satchel and remove a jug of Brandywine. There is a cup on the table. I hand him a full cup, saying he should drink to deaden the pain.

I pose questions about his injuries. Has he been racked? No. More broken bones? He grunts and points with difficulty to his loose arm. I loosen the sleeve of his blouse and gently press my fingers until he winces. His wrist is broken or disjointed. Through further questioning, I find he has burn marks on his chest and buttocks, with some blistered and weeping. The stench from his mouth causes me to blink and hold my breath. His tongue is crusted with dried blood and badly swollen, but I get no sense from him of how his facial injuries were made. The poor man is wrecked. I shake my head to dismiss thoughts of the men who took delight in the ingenuity of their cruelty. It will take some time to dress his wounds and ease his hurt.

He drinks four cups of Brandywine before I bathe his wounds, apply ointments, and wrap with cloth. It is a slow process and past noon before I have finished. I enlist Lady Mary’s help in the preparation of a hot soother of comfrey and willow bark, which he should take three or more times each day. I also leave him with a small jar of oil of cloves to apply to the tender areas of his mouth. There will be no profit in attempting conversation today. I must return tomorrow.
…

"A gripping and evocative page-turner that vibrantly brings Elizabeth's London to life." Steven Veerapen, author of A Dangerous Trade.

"Full of convincing characters both historical and imagined." Peter Tonkin

Pick up your copy for free with Kindle Unlimited subscription. 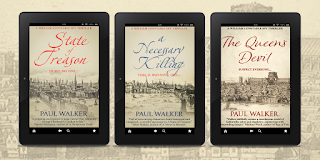 Paul is married and lives in a village 30 miles north of London. Having worked in universities and run his own business, he is now a full-time writer of fiction and part-time director of an education trust. His writing in a garden shed is regularly disrupted by children and a growing number of grandchildren and dogs.

Paul writes historical fiction. He inherited his love of British history and historical fiction from his mother, who was an avid member of the Richard III Society. The William Constable series of historical thrillers is based around real characters and events in the late sixteenth century. The first two books in the series - State of Treason and A Necessary Killing - were published in 2019. The third book, titled The Queen's Devil, was published in the summer of 2020.