The inspiration behind Beneath Black Clouds and White by Virginia Crow 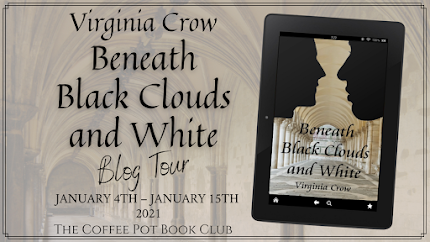 Despite adoring his family and enjoying frequenting gaming tables, Captain Josiah Tenterchilt’s true love is the British Army and he is committed to his duty. As such, he does not hesitate to answer the army’s call when King Louis XVI of France is executed.

Accompanied by his wife to Flanders, Josiah finds his path crosses with a man who could not be more different from him: an apprentice surgeon named Henry Fotherby. As these two men pursue their own actions, fate and the careful connivance of a mysterious individual will push them together for the rest of their lives.

But it is a tumultuous time, and the French revolutionaries are not the only ones who pose a threat. The two gentlemen must find their place in a world where the constraints of social class are inescapable, and ‘slavery or abolition’ are the words on everyone’s lips.

Beneath Black Clouds and White is the prequel to Day's Dying Glory, which was published by Crowvus in April 2017. 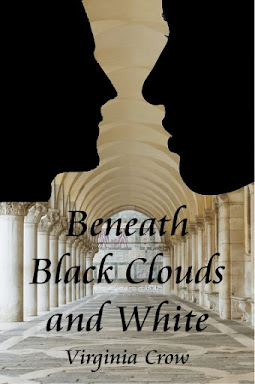 The inspiration behind Black Clouds and White

God and the Devil in the Deeds of a Surgeon

Beneath Black Clouds and White was the third book I wrote with the Tenterchilt family, so I’d already got to know them quite well. I had planned out every aspect of their lives from 1806-1855, spanning three generations. I had looked into the evolution of social constraints over that time, as well as the military advancements made (the Tenterchilts are a military family, with only occasional deviations from this rule). 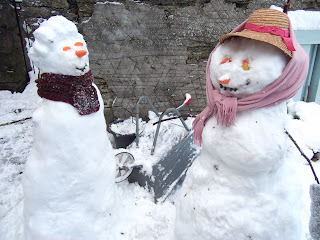 But now it was time for something different. I was ready to go backward in time. And so I told the story of how the paths, which would later build this dynasty, first crossed. I don’t want to spoil the later stories for anyone who hasn’t read them, but the friendship between Josiah Tenterchilt and Henry Fotherby was one that would last them both for their whole lives.

The only problem was this:

When we meet Henry Fotherby in Day’s Dying Glory, he is a disillusioned former army surgeon, who is now a doctor. I knew he had an amazing backstory, but to tell it to its full worth, I had to really explore the world of military and civilian medicine and surgery during the 1790s.

I do almost all my research under the cautionary – and seemingly contradicting – phrases:

God is in the details

The devil is in the detail

I had flippantly remarked in Day’s Dying Glory that Fotherby had saved Major Tenterchilt’s leg and life after he was wounded several years ago. I’d been content to know that such things were reported to have happened, usually by the soldiers in question. But now I’d embarked upon this prequel, it was not enough to know that it happened, I needed to know how it happened.

During the second half of the eighteenth century, medicine and surgery were both beginning to make speedier advancements. But much of what was practiced could still be traced back to ancient techniques. As warfare had evolved, however, the surgery to deal with it evolved too.

So I delved into the world of medicine. 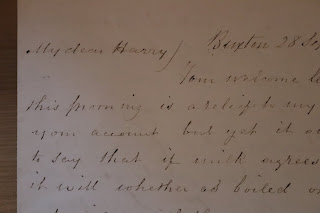 Buxton letter of thanks to a physician

One of the most fascinating things was how effectively primitive methods were used. Simple things, like using a cut onion to draw out toxin from a wound. Who comes up with that?

Also, and somewhat disturbing, was looking through the implements which were used in battlefield surgery. The lack of reliable anaesthetic was a big thing, and the accounts I read of both successful and fatal procedures, could have made much more comfortable reading with a dose or two of ketamine!

As it was, here is how events played out in the novel:

“This is your challenge, Fotherby. If you fail in this then the army will not have you back no matter how many exams you take.”

The weight of the man’s words fell heavily on his shoulders as Captain Peters thrust the scalpel towards him. He bit his lower lip thoughtfully as he accepted the instrument from his captain’s outstretched hand. Not daring to look at Kitson, he stepped over to the campaign desk and exchanged the scalpel for a thin pair of long-handled forceps and tried to stop his hands from shaking. He knew he was doing the right thing. Whatever Peters and Kitson thought, this was a new battlefield procedure, successfully practised during the American war.

Kitson stepped away from the table, his hands raised in a surrendering gesture, before he returned to tend some of the other wounded men. Peters nodded slowly towards Fotherby before he took Captain Tenterchilt’s shoulders and tried to hold him still, but he awoke and tried to free himself of the man who stood over him.

With a strength that surprised Fotherby, Peters pushed him back down with one hand and, snatching the leather strap of Captain Tenterchilt’s sword belt, he pushed it into the man’s mouth.

“Get on with it, Fotherby.”

Fotherby tried to ignore the twitches the man before him made. He applied a tourniquet and, pinning Captain Tenterchilt’s leg still beneath him, stretched the wound open far enough to allow the forceps into the man’s tissue. If he felt that at any point he was losing his control he considered all that weighed upon his success and, selfishly, he realised that it was not solely this man’s life, nor the happiness of his wife whose heartrending distress he had witnessed earlier, that was at stake. It was a proof that he could go on to achieve that goal he had dreamt of as a surgeon. As he delved further into the man’s leg, Captain Tenterchilt’s movements became more and more desperate, so that Fotherby almost lost control of the instrument in his hand, before at last he felt the ends of the forceps close about the shot. Pulling it back as gently as he could, he tried to steady his shaking hand. The ball slipped only once before Fotherby pulled it out from the captain’s leg. Captain Tenterchilt lay still, his eyes were closed and his body no longer tried to resist the crude surgery. For a moment Fotherby thought that he had died but, as he poured a sprinkling of wine into the man’s wound, the captain forced himself out of the hold that Peters had on him and tried to reach his leg. Fotherby stumbled away from such a gesture but Peters snatched the captain to him and, holding his arm about Captain Tenterchilt’s throat, spoke calmly to his apprentice.

“Are you to stitch the wound, Fotherby?”

Fotherby nodded quickly and tried to steady his nerves and his hands to thread the circular needle before he proceeded to apply surprisingly neat stitches to the wound. He felt quietly proud of himself as he stood back to admire his work. But as his gaze turned to the pained face of the man he had just operated on, spitting out the leather belt which was now peppered with tooth marks, he felt his resolve shatter and the needle slipped from his fingers as he fumbled with the knife to sever the thick thread.

Ultimately, it is this scene which sets up everything which follows in the book, and its sequels (of which there are three, but only one published so far!). It is this daring procedure which enables Fotherby to qualify and, when he is challenged on it by the Royal College of Surgeons, he responds:

“when the alternative is death it is a good time to put the case for living to the test.”

It was important to Fotherby’s character that he not only knew but also acted upon the latest medical advancements. This meant that I was flicking through some of the most obscure and – quite frankly – terrifying accounts of what the surgeon did to their fellow men in the hopes of bettering their lives. But Fotherby is an idealist throughout the books and, if he sees that something has worked, he is always eager to put it to the test.

After researching the surgery aspects of the medical history, next came the qualification side. This was much lighter reading, thank goodness! I found a couple of accounts from individuals who had partaken in the exams during the years around when Fotherby would have been there and placed my setting within their description. Writing it up was pretty fun, working within the confines of the accounts while putting Fotherby’s rose-tinted outlook on it all. Remembering that God and the devil were lurking in the finer details, I reviewed the policy of Surgeons’ Hall in regard to qualifications and had the grumpy clerk announce:

“Next exam is on 20th February then again on 6th March. First and third Thursdays each month. If you have a genuine interest in joining the Surgeons’ Hall you should have known that.”

But, not dissuaded for more than a short while, Fotherby qualifies. By the end of the book, he has undergone the complete transition from a young man with big dreams to a gentleman with enough qualifications to make him a doctor.

I like to think my foray into medical history provides an extra three-dimensional slant to the storytelling. It certainly sparked a fascination within me and, since writing Beneath Black Clouds and White, I’ve always been meticulous about the topic. 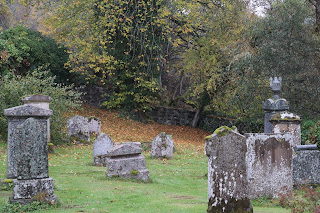 At the moment, I’m writing a Middle-Grade novel set during the Black Death outbreak in Kirkmichael for a class at our local primary school. In many ways, it’s a gruelling topic to research – and trickier still to make it Middle Grade appropriate! – but I like to imagine Fotherby back then and how he might have responded to it. He would have made it all make sense and, via the details with God and the devil, I hope that’s what I managed to do, too. 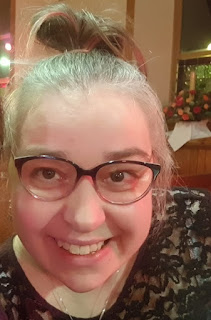 Virginia grew up in Orkney, using the breath-taking scenery to fuel her imagination and the writing fire within her. Her favourite genres to write are fantasy and historical fiction, sometimes mixing the two together such as her newly-published book "Caledon". She enjoys swashbuckling stories such as The Three Musketeers by Alexandre Dumas and is still waiting for a screen adaption that lives up to the book! When she's not writing, Virginia is usually to be found teaching music, and obtained her MLitt in "History of the Highlands and Islands" last year. She believes wholeheartedly in the power of music, especially as a tool of inspiration. She also helps out with the John O'Groats Book Festival which is celebrating its 3rd year this April. She now lives in the far-flung corner of Scotland, soaking in inspiration from the rugged cliffs and miles of sandy beaches. She loves cheese, music, and films, but hates mushrooms. 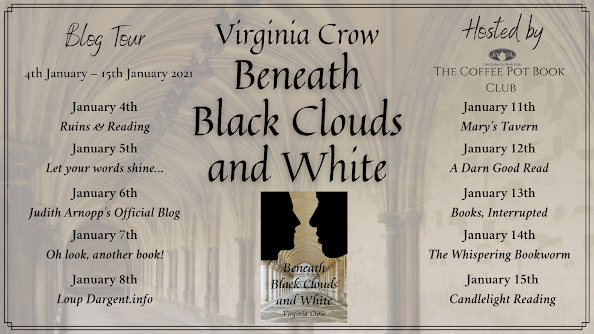