Interview with Catherine Meyrick, author of The Bridled Tongue 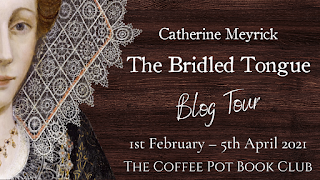 Alyce Bradley has few choices when her father decides it is time she marry as many refuse to see her as other than the girl she once was--unruly, outspoken and close to her grandmother, a woman suspected of witchcraft.

Thomas Granville, an ambitious privateer, inspires fierce loyalty in those close to him and hatred in those he has crossed. Beyond a large dowry, he is seeking a virtuous and dutiful wife. Neither he nor Alyce expect more from marriage than mutual courtesy and respect.

As the King of Spain launches his great armada and England braces for invasion, Alyce must confront closer dangers from both her own and Thomas's past, threats that could not only destroy her hopes of love and happiness but her life. And Thomas is powerless to help.

Death and life are in the power of the tongue. 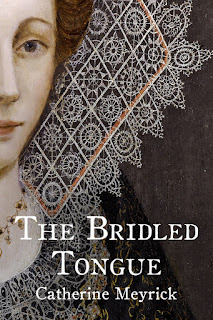 I am an Australian writer. I grew up on the outskirts of Ballarat, a large city in regional Victoria. I moved to Melbourne when I was seventeen to train as a nurse and have lived here ever since. I found nursing wasn’t my calling so I dropped out and went to university where I took a double major in History. I joined the Public Service and somehow completed a Master of Arts in History and librarianship qualifications at the same time. I worked as a senior tax assessor and later as a departmental librarian then took ten years out of the paid workforce while my children were young. Since then, I have worked as a primary school librarian and, until recently, a customer service librarian at my local library.

The time spent at home with my children gave me the opportunity to move beyond unfinished bits and pieces of writing that usually ended up in the bin. Once the children were at secondary school, I took writing courses and pressed on writing and revising and revising and revising. I managed to get an agent at one stage but that didn’t work out so I decided to publish myself and have never regretted the decision for a moment.

I’m also an avid reader, a neglectful gardener, and an obsessive genealogist. I have managed to identify previously unknown family members and clear up mysteries using both traditional documentary methods and DNA.

Apart from a handful of short stories and poems in the early 2000s, I have published two novels, Forsaking All Other in 2018 and The Bridled Tongue in 2020. The major characters in both novels are fictional although they do rub shoulders with some historical notables; the historical timeline and background are as accurate as I could make them. They are stand-alone novels but both are set in England in the mid-1580s and follow the lives of reasonably conventional young women of the middling sort. By making my characters conventional, I hoped to show something of the reality of lives in the past, the lack of freedom that women, and men as well, had in determining their own lives and even their choice of spouse, and the difficulties that a could arise when they stepped outside the boundaries of a far more rigidly structured society than our own.

Forsaking All Other begins in 1585 and follows the struggles of a young widow and waiting woman, Bess Stoughton, who discovers that her father is arranging for her to marry an elderly neighbour. Normally obedient Bess rebels and manages to convince her father to allow her a year to find a husband with whom she has some hope of happiness. Bess’s domestic concerns are set against the background of simmering Catholic plots to unseat Queen Elizabeth, and the involvement of English forces under the Earl of Leicester in the Netherlands in support of Dutch resistance to Spanish rule.

The Bridled Tongue also deals with the making of marriages in this period, this time an arranged marriage that the young woman goes along with it, as so many did. The novel also touches on other issues such as sibling rivalry and jealousy, the dangers of gossip, witchcraft accusations, and the way the past can reach out and affect the present. The backdrop is the threat of imminent invasion by the Spanish in 1588 – the Spanish Armada.

There is an important romantic element in both novels and I am aware that a number of people can be dismissive of historical fiction that includes this. For most ordinary women relationships were important, few occupations were open to them other than marriage and household management. The choice of a spouse, a matter over which most did not have a complete say, was of critical importance. Ideally, the person they married should be someone who was able to provide for and protect them and their children and treat them well – this could mean the difference between a contented life or one of misery and discord. For this reason, the path to and through marriage plays an important role in my stories – the ‘romantic’ element set in what I hope is a reasonably authentic background.

Tell us about The Bridled Tongue

The Bridled Tongue follows the life of Alyce Bradley as she adjusts to an arranged marriage, not one she particularly wishes for but has entered because she has no other options. It shows the way she grows into her role of manor wife and faces dangers not only from her husband’s enemies but her own past when jealousies stir up old slanders concerning her relationship with her grandmother who was thought by some to be a witch. The novel is set in a time when these sorts of slanders, combined with the beliefs of the time, could result in an accusation of witchcraft. In a witchcraft case, normal evidential rules were set aside and the most dubious hearsay accepted which could be enough to bring a person to the gallows.

The Bridled Tongue also touches on the corrosive effect on women’s relationships when they are valued mainly for their ability to produce healthy children and the poisonousness of favouritism within families.

The Bridled Tongue began life as ‘The Unbridled Tongue’ because an important element in the novel is the effects of gossip and slander – the work of those with unbridled tongues. In contrast, Alyce Bradley, the main character, has learnt to keep her tongue in check. I thought the title concentrated too much on those around Alyce, so I changed the title to ‘The Turtles Cannot Sing’ to reflect something of Alyce’s relationship with her husband. This is a line from a poem quoted in the novel, ‘A Modest Love’ by Sir Edward Dyer (1543-1607), an Elizabethan courtier.

The firmest faith is in the fewest words;
The turtles cannot sing, and yet they love:
True hearts have eyes and ears, no tongues to speak;
They hear and see, and sigh, and then they break.

The turtles referred to are turtle doves, the symbol of true love and fidelity to the Elizabethans. Although I loved the title, nearly everyone told me it was a stupid name that made no sense so, in the end, I changed it again. I went back to my original idea but this time as ‘The Bridled Tongue’. The title reflects Alyce’s character at the beginning of the novel, but is also a recognition of those in the story whose tongues should definitely be bridled.

I have taken a break from the Elizabethans and am now revising a novel, ‘Unspoken Promises’, based on a period in the life of my great-great-grandparents, Ellen Thompson and Harry Woods. It is the result of my own genealogical research as their story was basically unknown until I uncovered it through my family history digging, about ten years ago. It is set in Hobart, Tasmania, in the years around 1880. They were both the children of convicts and belonged to the lower end of the social scale where life was a struggle and the middle-class virtues we see as ‘Victorian’ were not much regarded. At this time Hobart was a vibrant town drawing people from every corner of the earth, where a person’s history wasn’t closely questioned. The story touches on such issues as secrets, family ties, poverty, and the struggles of unmarried mothers. I am hoping to show just how hard life was for these people, women in particular. While I would describe it as a love story, encompassing not only romantic love but a mother’s love for her children, this time it certainly doesn’t fall into the standard definition of a romance.

Once this novel is released, I will definitely be returning to the Elizabethans.

I am finishing the brilliant biography Thomas Cromwell: A Life by Diarmaid MacCulloch and also reading Taking the Waters by Lesley Sainty, the story of a sheltered but intelligent woman’s entry into fashionable society in Cheltenham in 1827. I have just begun the Booker Prize winner of 2020, Shuggie Bain by Douglas Stuart.

I read a range of books from non-fiction, to literature to thoughtful and entertaining fiction. I also love a good verse novel. While most of my reading is historical, I look most for books that will draw me into their world. 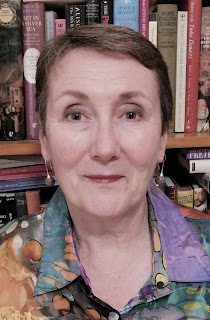 Catherine Meyrick is a writer of historical fiction with a particular love of Elizabethan England. Her stories weave fictional characters into the gaps within the historical record – tales of ordinary people who are very much men and women of their time, yet in so many ways are like us today. These are people with the same hopes and longings as we have to find both love and their own place in a troubled world.

Catherine grew up in regional Victoria, but has lived all her adult life in Melbourne, Australia. Until recently she worked as a customer service librarian at her local library. She has a Master of Arts in history and is also an obsessive genealogist. When not writing, reading, and researching, Catherine enjoys gardening, the cinema, and music of all sorts from early music and classical to folk and country and western and, not least of all, taking photos of the family cat to post on Instagram. 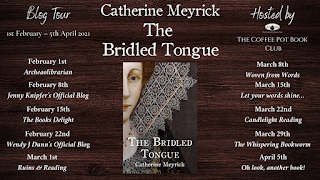